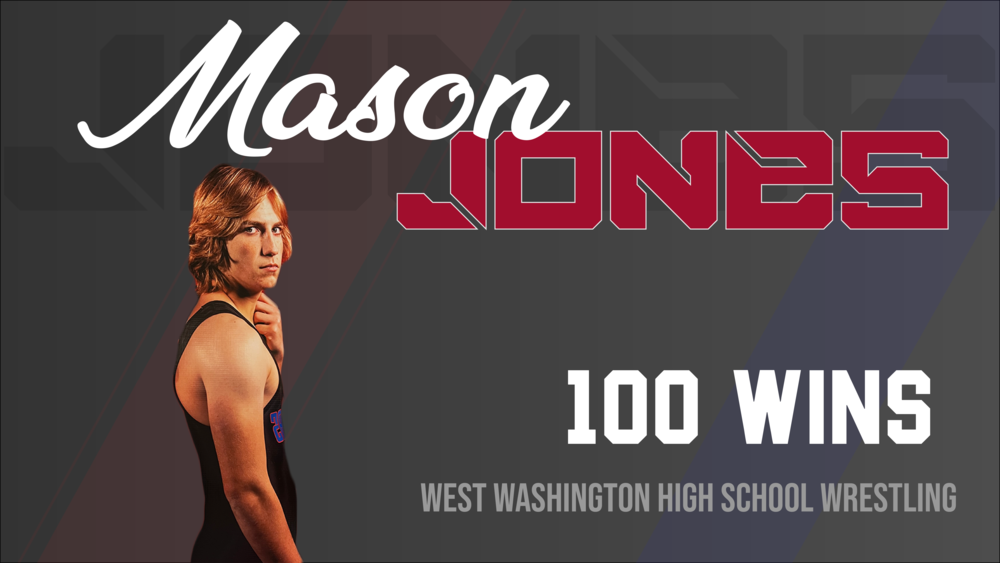 “As Mason draws nearer to his 100th career win, I can't help but to think about last season when he told me he wanted to wrestle in college. I knew from that point, he understood what a commitment and grueling task that would be. I also knew he would be up for the challenge. He had a great 30 plus win season last year and I am excited for him to be 1 of the few guys in the county that has climbed that 100 win mountain,” stated West Washington Head Wrestling Coach,Dennis Tankersley.

Mason’s accomplishments on and off the athletic arena speak for themselves.  He takes pride in everything he is involved in and is a great example of what a student-athlete should look like.

Academic Accomplishments:  Mason has been on the A-B honor roll every year of high school.  He was picked as the top US History student at West Washington High School.

Special and Dual Credit Classes:  Mason is a 4th year graphic design student.  This is also his 2nd year as a radio and TV student.  Furthermore, Mason has taken two years of college level English and Math classes.

West Washington teacher and BPA Advisor, Brian Wolfe, expressed his appreciation for Mason. “Mason has grown in leaps and bounds with his cinematography skills. He is able to incorporate camera shot angles, lighting principles, along with special effects knowledge in order to create a high quality video. Mason is all around talented in anything he is involved in,” he shared.

Extracurricular Activities:  Mason has participated in wrestling for five years.  Additionally, he decided to play football for the Senators this year as well.  Mason’s accomplishments include:

Mason is also very actively involved in leadership organizations at West Washington.  He is a member of both the National Honor Society (NHS) and the Fellowship of Christian Athletes (FCA).

Community Service:  Through NHS, FCA, and football opportunities, Mason is very involved in the community.

Future Pans: Mason is undecided where he will attend college.  His plans are to find a college where he can pursue a degree in engineering and wrestle.

The way Mason conducts himself on and off the field has made a lasting impact on those around him.  “Mason was a great addition to our football team this year.  He is a true leader on and off the field.  When he told me he wanted to play football,  I was excited because I knew he would immediately make our locker room better.  We are very proud of Mason and the example he has set for future Senator Football players.  He is one of the most selfless young men I have ever met.  I know he will be successful in all his future endeavors,” shared West Washington Head Football Coach, Jeremy Lowery.

Congratulations to Mason on his 100th career varsity win and for his many accomplishments as a student-athlete at West Washington!