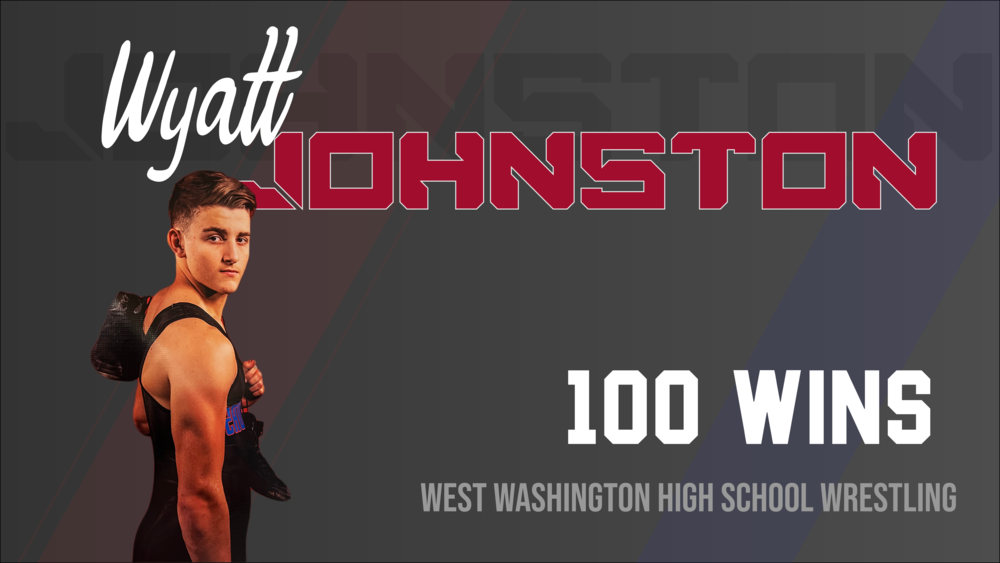 “100 career wins is a huge milestone for a high school wrestler. Averaging 25 wins for all 4 seasons is a tough feat to accomplish. Wyatt has put in so much time and effort in the season as well as off season preparing for this accomplishment. Wyatt is very focused and determined, but I'm not sure he was worried about the 100 win milestone, he just wrestled who was in front of him.  Wyatt is an athlete that all coaches appreciate having.  His self motivation and discipline is second to none at West Washington.  He is a very goal oriented athlete that will not let anything stand in his way of accomplishing what he sets his mind to,” shared West Washington Head Wrestling Coach, Mr. Dennis Tankersley.

Wyatt does not only excel on the wrestling mat.  He is a complete student-athlete who is involved  in his many academic, extracurricular, and community activities.

Academic Accomplishments: Wyatt is a Presidential Scholar Nominee.  He scored 1370 on the SAT.  Wyatt has successfully passed the AP Physics Test.  Furthermore, he has been selected as an Indiana Rising Star not once, but twice.

Special and Dual Credit Classes:  Wyatt has taken several dual credit courses, but he seems most passionate about Psychology.  Additionally, he takes the Radio/TV Capstone Class where he gets to make promotional videos and news segments for West Washington High School.

“The most beneficial to my future career would be psychology. I plan to obtain a doctorate in physical therapy, so psychology would help me to understand the mental aspect of health,” explained Wyatt.

Community Service:  Wyatt has volunteered at the YMCA and has worked at the racetrack over past summers.  He is also actively involved in the West Washington Youth Football League.

Future Pans:  Wyatt intends to wrestle in college while obtaining a doctorate in physical therapy.  “I’d love to coach in either football or wrestling someday, as well,”  he explained.

How has West Washington helped you prepare for your future plans:  “West Washington has helped me become a leader in my community and learn to forge my own path, while developing strong connections with those around me,” noted Wyatt.

Wyatt has made a lasting impression on many people at West Washington. Head Football Coach, Jeremy Lowery explains, “Wyatt brings great energy to everything he does.  He truly leads by example in the attitude and effort he brings each and every day.  It has been a privilege to coach him in football the last two years.  He is a great teammate that makes everyone around him better.  Wyatt is a winner and there is no doubt in my mind he will be successful at anything he puts his mind to. “

Congratulations to Wyatt on his 100th career varsity win and for his many accomplishments as a student-athlete at West Washington!