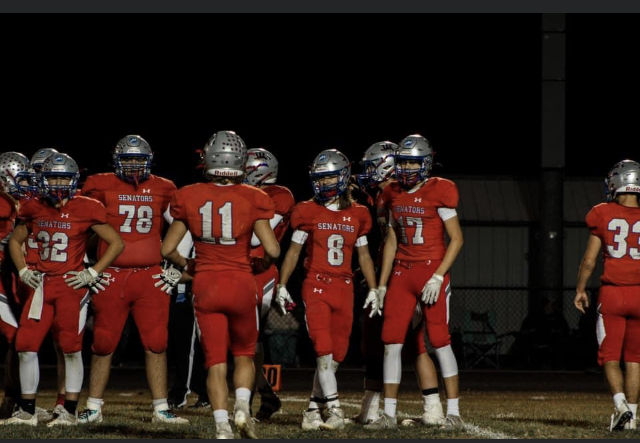 The play began much the way the entire evening had for the Senator offense; in shambles.  After three quarters of scoreless football, the Senators face 4th and long in the red zone, down 6-0.  At this crucial moment in the game, the snap would go awry and the ball ended up on the ground.  Giving up the ball at this juncture would put tremendous pressure on the Senators to try to pull this win from the fire.

Like a microcosm of the game, however, what started as disappointment ended in joy, as junior quarterback Kenton Chase would track down the ball, scramble around, and find senior wide receiver Mason Cox in the endzone for the Senators first score.

The fourth quarter would see the Senators explode for 22 points, enroute to a 22-14 win over the Eastern Greene Thunderbirds.

“This was a tough game,” said head coach Jeremy Lowery.  “But at this point in the year, any win is a good win.  Proud of how our kids responded after halftime.”

Prior to Chase’s touchdown throw, the Senator defense would carry the day for the Senators, with the Thunderbirds lone score coming off a short field after a turnover.

The Thunderbirds would hold a 6-0 lead at halftime.

After a mostly uneventful third quarter, junior cornerback Jaxson Cambron would intercept an errant Thunderbird pass to get the ball back for the Senators.

After the heroics on 4th down, senior running Ethan Roberts would punch in the two point conversion to give the Senators an 8-6 lead.

After forcing a quick three and out, the Senators would need just one play to extend the lead.  Chase would roll right, see a crease, and scramble 62 yards untouched to the end zone.

The Senator defense would stall the next Thunderbird drive in the red zone, and the Senator offense would matriculate the ball down the field before Chase would find sophomore tight end Tyler Miller on a 12 yard strike.  Chase would find junior slotback Greyson McCoy open on the two point play to make it 22-6.

The Thunderbirds would add a late score to make the final 22-14.

The Senators are in action next Friday night at Art Sanders field against Providence.