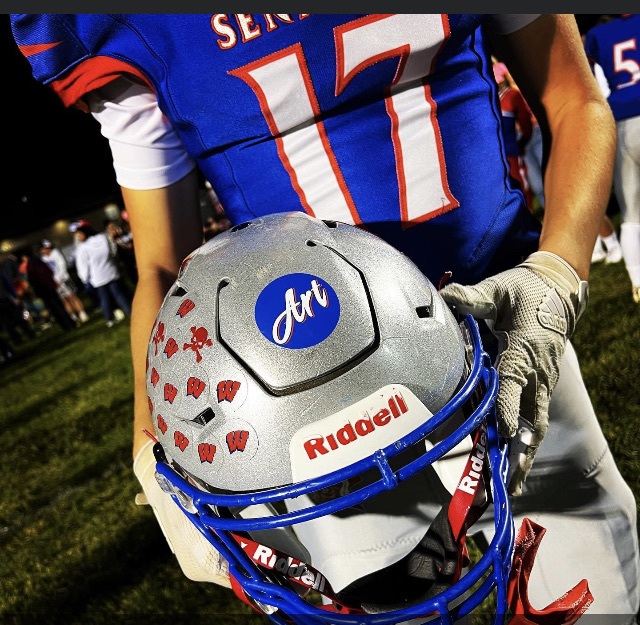 It was a play from a bygone era.  The Short Punt was an offense developed closer to the turn of the 20th century than the 21st.  It was the offense deployed by Art Sanders for 25 years when he started and developed the Senator Football Program.  In tribute to coach, the first Senator play was called “Art Sanders” and resembled his beloved Short Punt formation.

It was fitting that a week after his passing, on the field named after him, the play “Art Sanders” would go for a 75 yard touchdown, as junior quarterback Kenton Chase would follow a bevy of blockers around the right end and scamper untouched into the end zone. The Senators would go on to claim the Washington County Championship over Salem, 14-7.

“We wanted to pay tribute to the man who started this special program,” said head coach Jeremy Lowery.  “It is pretty special that his play started the scoring tonight.”

A defensive battle from start to finish, the Senators would start the evening by forcing a 3 and out.  After the score by Chase, running back Ethan Roberts would punch in the two conversions for an 8-0 advantage.

The teams would trade possession, before junior linebacker Greyson McCoy would intercept an errant Lion pass.  The Senators would drive to midfield, before Chase would pin the Lions inside the 5 with a great punt.  After forcing another 3 and out, the Senator offense would move the ball into the red zone before Roberts would find paydirt from 10 yards out to give the Senators a 14-0 lead.

Senior cornerback Mason Cox would end the last Salem drive before half with an interception, maintaining the Senator two score lead.

The second half would see the battle of attrition continue.  The teams would trade possessions before Salem would put together a drive and score to make the margin 14-7.

The Senator defense would rise up again, however, when senior linebacker Wyatt Johnston would force a fumble to end one drive, and snuff the Lion’s chances by holding firm on their final drive on 4th down.

The Senator offense would finish the game out, as Roberts would tuck in behind his offensive line on 4th and 1 to seal the game and championship for the Senators.

The Senators start sectional play next week at Eastern Greene.