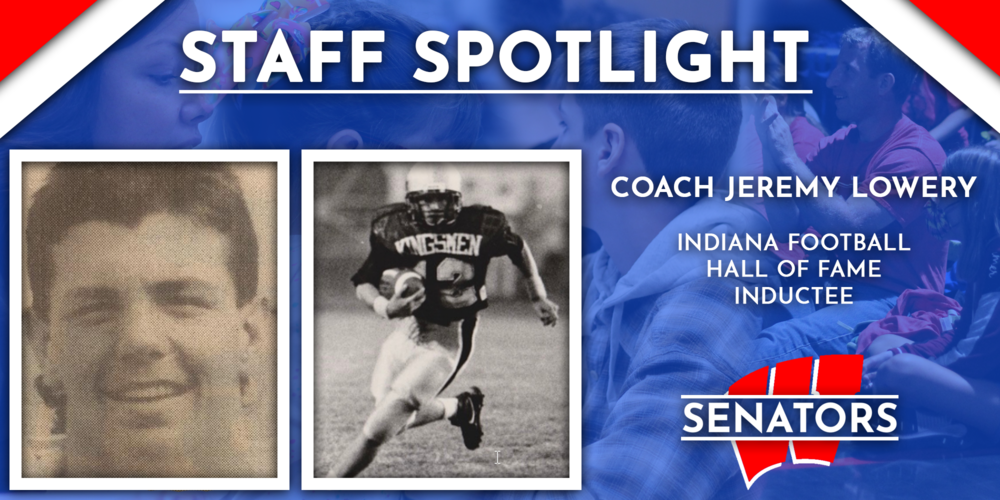 When asked what the honor means to him Coach Lowery stated, "I am honored to be inducted into the Indiana Football Hall of Fame. I cannot express the feeling of gratitude toward all of the incredible people who made this possible."

Coach Lowery moved to Indiana from Texas prior to his sophomore year in high school. Coach Lowery was fortunate that he moved to Mishawaka, Indiana and enrolled at Penn High School where he played for the legendary coach Chris Geesman and their strong program. Coach Lowery started his junior and senior seasons where he led the team in rushing, eclipsing 1,000 yards each season. Coach Lowery played on the 1989 state runner-up team that had an 89 game regular season winning streak.

Coach Geesman  said, "Jeremy was the perfect combination of a great teammate and exceptional competitor. He wanted to win and he approached every day, every practice and every drill as a competition. Jeremy was fast and he had the best vision and the ability to cut back and make big plays." He added, "Jeremy was a great teammate. It was never about him or his own stats. When he scored, the team scored. He made a point to celebrate with his teammates and not make it about himself. Jeremy really deserves this honor and I am proud of him."

Coach Lowery turned his love of playing football into a coaching career that began in 1993. Coach Lowery got his first head coaching job in 2017. This season will be his second season as the head coach of the Senators.

In 25 years of coaching, Coach Lowery has had the opportunity to have a positive impact on hundreds of former players. Former player, Lee Wroblewski said the following about Coach Lowery: "He's an ultimate competitor with tremendous confidence and positivity. More than that, his love and passion for the game are undeniable. Football isn't just football for Jeremy. It is a brotherhood, a family that lasts a lifetime."

Coach Lowery was humble in his acceptance of the recognition stating, "I owe this recognition to my loving and supportive family, all of my incredible coaches, and to so many unbelievable teammates."

Coach Lowery commented on how fortunate he feels to have had the opportunity to excel as a player and coach. "They say luck occurs when hard work meets opportunity. I am not sure if playing the game I love can be considered hard work, but I do know that there is no chance my experience is possible without the dedication and opportunities provided to me by so many wonderful people. I am thankful and blessed to receive this honor."

West Washington is lucky to have Coach Lowery leading our children on and off the field. We are proud of his accomplishment, but even more proud that he has dedicated himself as a coach and teacher to share his love for football and competition with our students.