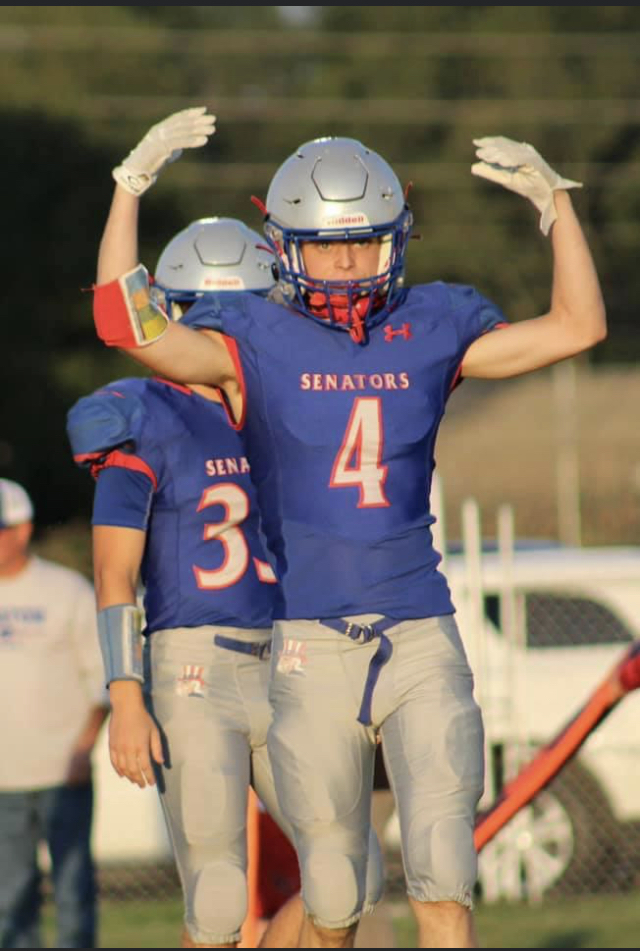 Senators Victorious in Round One

A cold autumn mist fell Friday evening at Art Sanders Field.  Tiny droplets of water seemed to cling to the air, fragmenting the lights of the giant poles illuminating the field, breaking them into individual wavelengths of colors.  It felt like football weather.  It felt right.

The Senators felt right, as they pummelled the visiting Rock Creek Lions 60-0 in round 1 of sectional.

“Super proud of the fact we played the cleanest game we played all year,” said head coach Jeremy Lowery. “No better time of the year to be doing that than now.”

The Senator defense would turn in their best performance of the season, holding the Lions to negative yards on the evening, forcing 3 turnovers, and not allowing a first down until the second half.

The Senator’s second possession would see junior running back Ethan Roberts score his first of 3 touchdowns on the evening, as he pounded the ball into the end zone from 15 yards out.

Sophomore quarterback Kenton Chase would find senior wide receiver Hunter Thompson in the back of the end zone for a 10 yard touchdown pass.

Roberts would score next, running behind the dominant Senator offensive line on a 20 yard scamper.

After freshman running back Hudson Cress returned a Rock Creek punt to the 5, he would line up in the backfield and take the hand off, racing untouched into the endzone.

Johnston would score from 55-yards out on a weaving run.  Roberts would follow a great block by freshman wide receiver Tyler Miller on a 15 yard jaunt, making the score 48-0 at half.

The second half would see sophomore quarterback Titan Williams find sophomore slot Zach Stice in the corner of the end zone on a 5 yard pass, and sophomore running back Evan Wills would cap the scoring for the evening, smashing into the end zone from 2 yards out.

The game ended on a somber note, as sophomore linebacker Peyton Schneck suffered a leg injury after making a tackle.  The thoughts of Senator Nation are with Peyton and his family.

The Senators will be at Springs Valley for round two of the sectional next Friday.