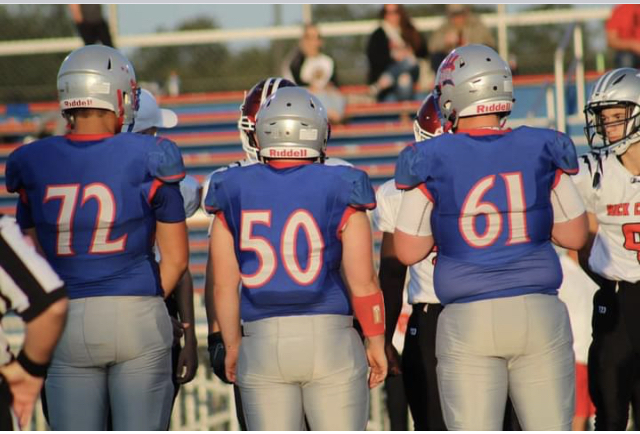 Senators Pick Off Win Versus Wolfpack

Proverbially, possession is nine-tenths of the law.  As in law and property rights, possession is nine-tenths of most sports involving a ball.  Whomever has the ball in their hands sets the tempo and strategy of the game.  In football, a game of starts and stops between plays, this is even more vital.  In longitudinal studies on the matter, the turnover battle correlates most closely to determining the winner of the contest.

On an unseasonably warm October evening at Art Sander’s Field, the Senators would find themselves winning that metric and the game, as they forced 7 turnovers en route to a 50-0 victory over the Crawford County Wolfpack.

“It’s always a good thing when your defense can generate turnovers,” said long time defensive coordinator, Mark Gibson.  “We have a lot of younger players on that side of the ball, and they have been working hard in practice and it was nice to see it pay off tonight.’

The Senators would win the toss and elect to receive.  After trading possessions, the Senators would break the seal when the Senator offensive line would open a massive hole for junior running back Ethan Roberts, who out ran the Wolfpack defense down the sidelines for an 80 yard touchdown run.  The Senator offensive line, comprised of freshman tackle Landon Holloway, sophomore guard JG Cruz, senior center Cam VanCleave, senior guard Kaden VanCleave, junior tackle Kye Strother, and junior tight end Gavin Ball, would open another massive hole on the two point conversion for an 8-0 lead.

On the ensuing Wolfpack possession, sophomore linebacker Zach Stice would pick off the first pass of the evening to set up the Senators at midfield.

Sophomore quarterback Kenton Chase would scramble and find senior wide receiver Hunter Thompson for 20 yard on first down, and after junior slot Wyatt Johnston ripped off a 15 yard run, Roberts would punch the ball into the end zone again from 1 yard out.

Senior defensive tackle Clayton Holloway would force a fumble to end the next Wolfpack drive, and Thompson would catch a 10 yard touchdown pass from Chase.

Crawford County would turn it over again when freshman defensive back Hudson Cress would step in front of a pass and run it down to the 1 yard line.  Cress would have his number called on the next play for the first rushing touchdown of his career.

Freshman Landon Holloway would buzz underneath another in breaking route and return it 20 yards for a score.  It would be the first of three interceptions on the evening for the young linebacker, tying a school record.

Roberts would rip off another 50 yard touchdown run, Johnston would pick off another pass, follow it up with a 55-yard catch and run from sophomore quarterback Titan Williams, and sophomore running back Greyson McCoy would dart into the endzone from 7 yards out to cap off the scoring for the half and the evening.

The Senators (3-3) are in action next Friday at Salem.