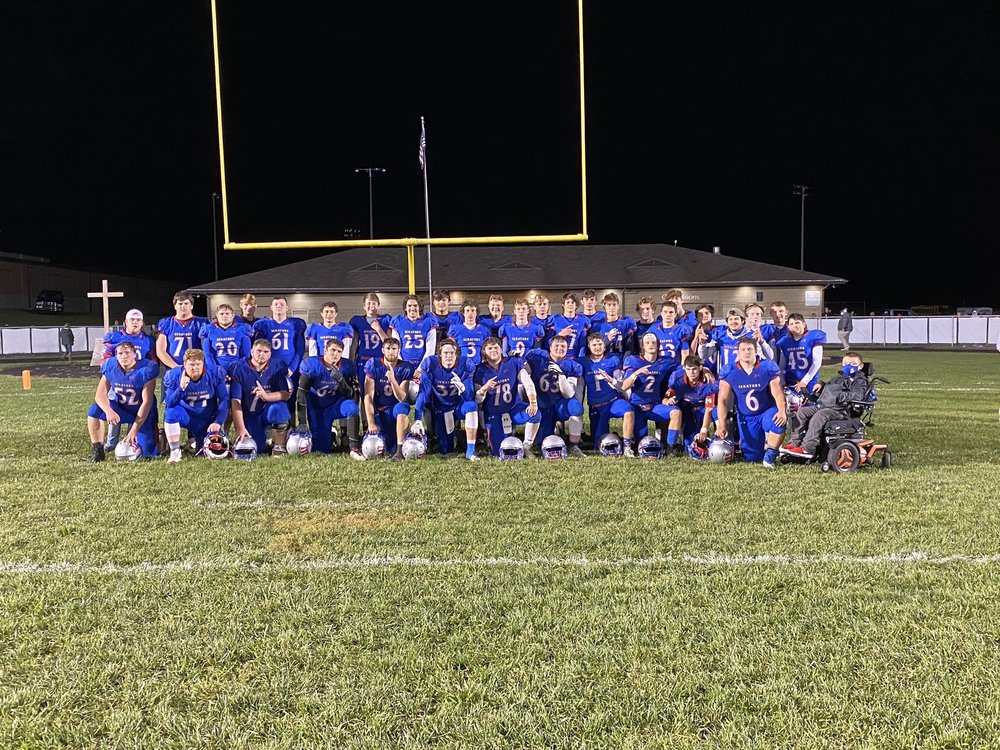 Objects at rest tend to stay at rest, unless acted upon by an outside force.  Once an object gains inertia, it will tend to maintain that vector unless acted upon by an even greater force.  It is constant collisions and violent redirections that allow all things to improve; to come through upheaval and opposition and be stronger for the experience.  While these forces can be seen physically on the football field as linemen slam into each other and tacklers explode into ball carriers, it is the unseen momentum that can truly swing the outcome.

Over a 4 play stretch, the Senators imposed their will against that momentum and ran away with the rest of the game for their second straight PLAC title.

Facing 4th down and goal, and clinging to a touchdown lead, senior defensive tackle Bryce Brown sacked the Perry Central quarterback to get the ball back for the Senators.  Senior quarterback Holden Bowsman would move the ball to midfield on a 40 yard keeper, and two plays later, Bowsman would call his own number again from 45 yard out for the score.

The Senators never looked back and finished the game with a 39-22 victory.

“Sometimes defensive momentum carries over to the offensive side of the ball,” said defensive coordinator Mark Gibson..  “We talk about making plays in all 3 phases (defense, offense, and special teams).  It was nice to see a big red zone stop that turned into points.”

The night’s action would start with the teams trading possessions, and after the Senators forced a three and out, Bowsman would find senior tight end Jacob Strange on a 25 yard catch and run to the end zone.  Strange never broke stride as he reached out and plucked the ball from the air with one hand.

“That was an impressive play by a big athlete,” said head coach Keith Nance.  “To explode off the line, catch the ball with one hand, and then score with a guy who is 6’6’’ is something you don’t see a lot.”

On the ensuing possession, senior linebacker Charles Madden would tip Perry Central’s pass, Brown would bat it around, and it landed softly in Strange’s hands as he ran untouched 35 yards for the pick six.

But Perry Central would not go away, taking a long drive that culminated with a 2 yard run.  The Senators had the ball moving on the next possession, but a bad bounce turned into an interception that ended that drive.

Perry Central, momentum surging on their side of the ledger, drove deep into Senator territory.

The Senators would bow their back, however, and after those 4 successive plays, would take a 20-8 lead into half.

The Senators received the ball to start the second half, and Bowsman would cap off that drive with a 10 yard keeper following a caravan of blockers into the endzone.

Perry would answer with a 3 yard score, but Bowsman would notch his 3rd rushing score of the evening from 55 yards out.

The Senators would get a stop on the ensuing defensive possession, and Bowsman would find senior running back Bobby Stevens on a 2 yard pass to pay dirt.

Perry would score once more to close within 17 points, but the Senators took the air out of the ball and ran off the last 7 minutes of the game.

Of particular note in this game was the defensive play of Brown, who swatted 3 Perry Central passes to the ground before they got the chance to move beyond the line of scrimmage.

West Washington moved to (6-0) on the season, and will travel to Washington, Indiana to take on the 3A Hatchets (3-4).