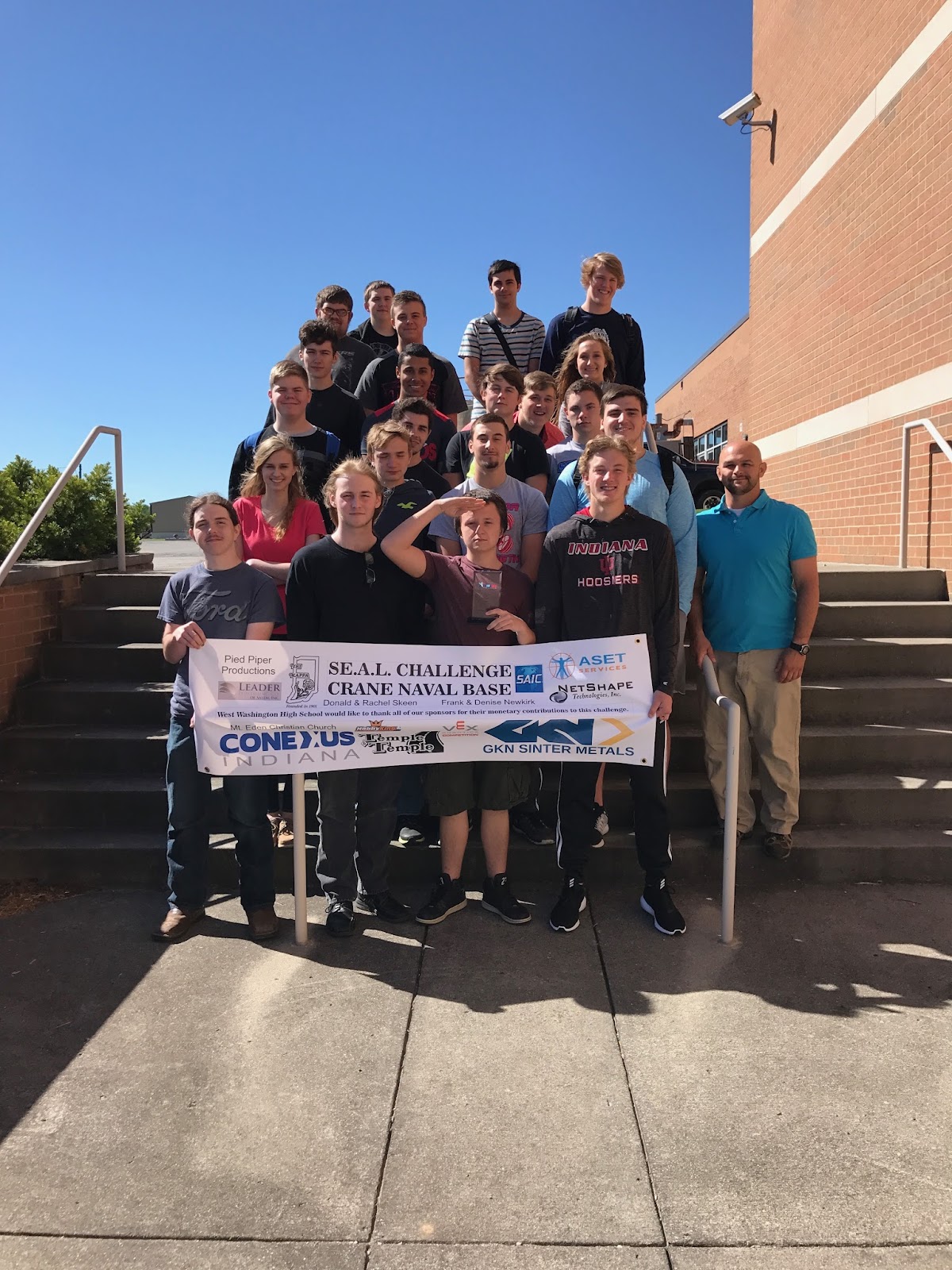 West Washington’s/Lost River Career Cooperative engineering program participated in the Sea Air Land challenge on 4/15/17. This competition was sponsored by Crane Naval Base and was held at IVY Tech campus in Bloomington. West Washington sent 4 teams to the competition. Each team was put through a rigorous evaluation process including, system cost, innovation, Prototype quality, durability, and system engineering.

We would like to thanks all of the sponsors that helped us meet our donation goals. All of the robots had a budget of $500 each and all of them came in under budget. Our sponsors were Conexus, GKN Sinter Metals, Temple and Temple Paving and Excavating, Aset Services, NetShape Technologies INC, Leader Publishing, Pied Piper Productions, Mt. Eden Christian Church, Tri Kappa, Donald and Rachel Skeen, Frank & Denise Newkirk. We would also like to give a special thanks to our Engineering mentors Charles Elgin, Tom Traggesser, and Shawn Bodle.

The competition details were for the Sea team to design and build a submarine that would simulate an unmanned vehicle retrieving salvageable wreckage from the bottom of the sea floor. The design criteria was to build an ROV that would change buoyancy to surface and sink after each successful pick up. This also had to be done only by the pilot watching a viewing screen. West Washington had 2 teams enter this contest. Team EVAlution comprised of team captain Austin Pedigo, Eva Martin, Donnie Walton, Alex Ragains, Waylon Dicus, Jackson Byrne, and Xavier Burton.  With this team's design they finished 3rd overall in the Sea challenge. This team had to wire and solder all of their electronic components to their remote and the use of an RV backup camera with Infrared technology made their team stand out. 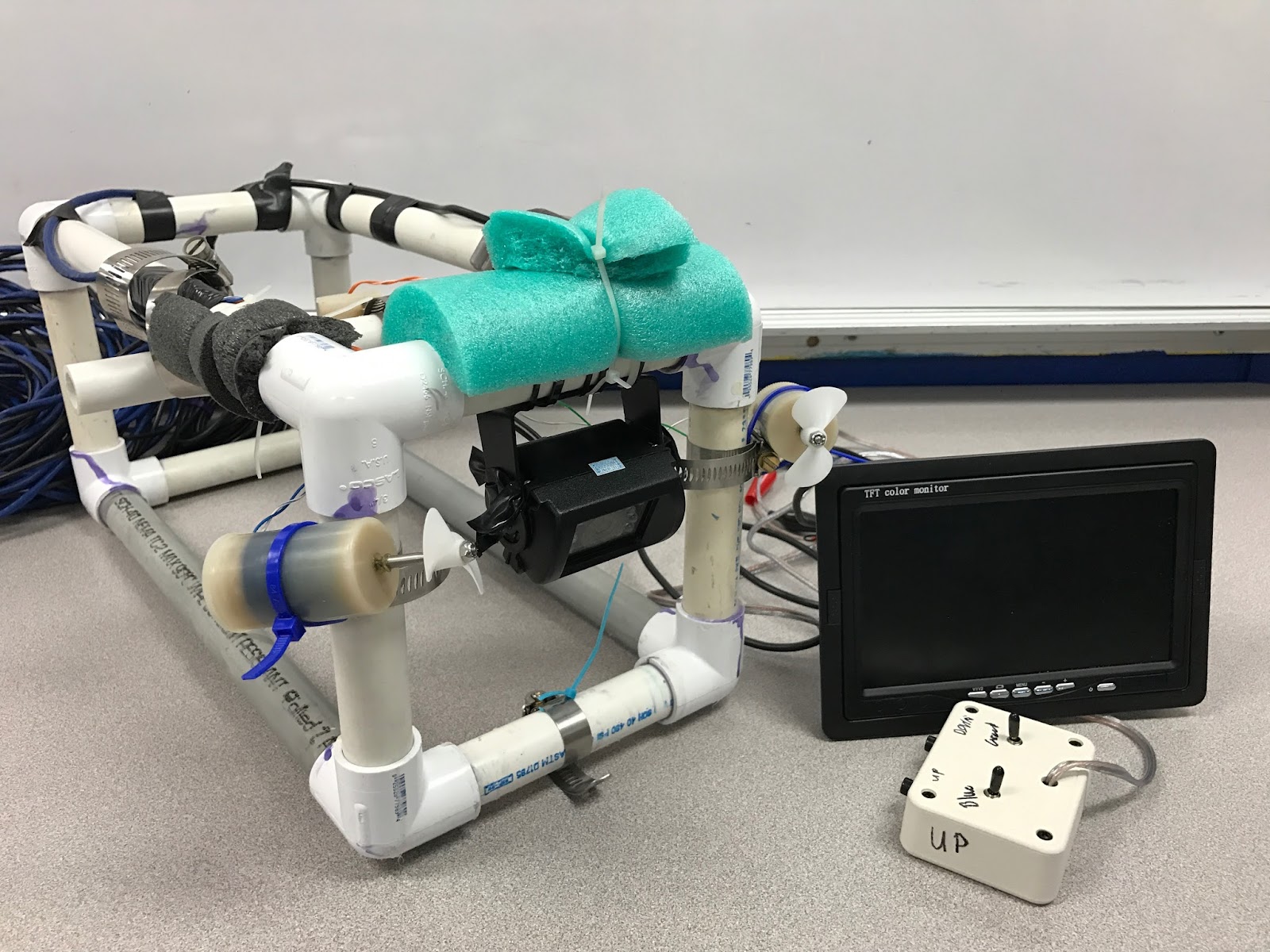 Team Crimson Tide was comprised of team captain Caleb Murphy, Tanner Packwood, Hunter Irwin, Daniel Wolfe, Kendall Alexander, Iziah Jackey, and Lee Roy White. This team finished 4th overall in the Sea challenge. They had some very cutting edge design innovations by using Vex Robotics components and waterproofing them by researching and applying a corrosion solution to the motors called “Corrosion X”. They also decided to make their ROV wireless by wiring their ROV to a floating Buoy that transmits signal to the command center where the pilot is. This was also done with First Person Viewer (FPV) goggles. 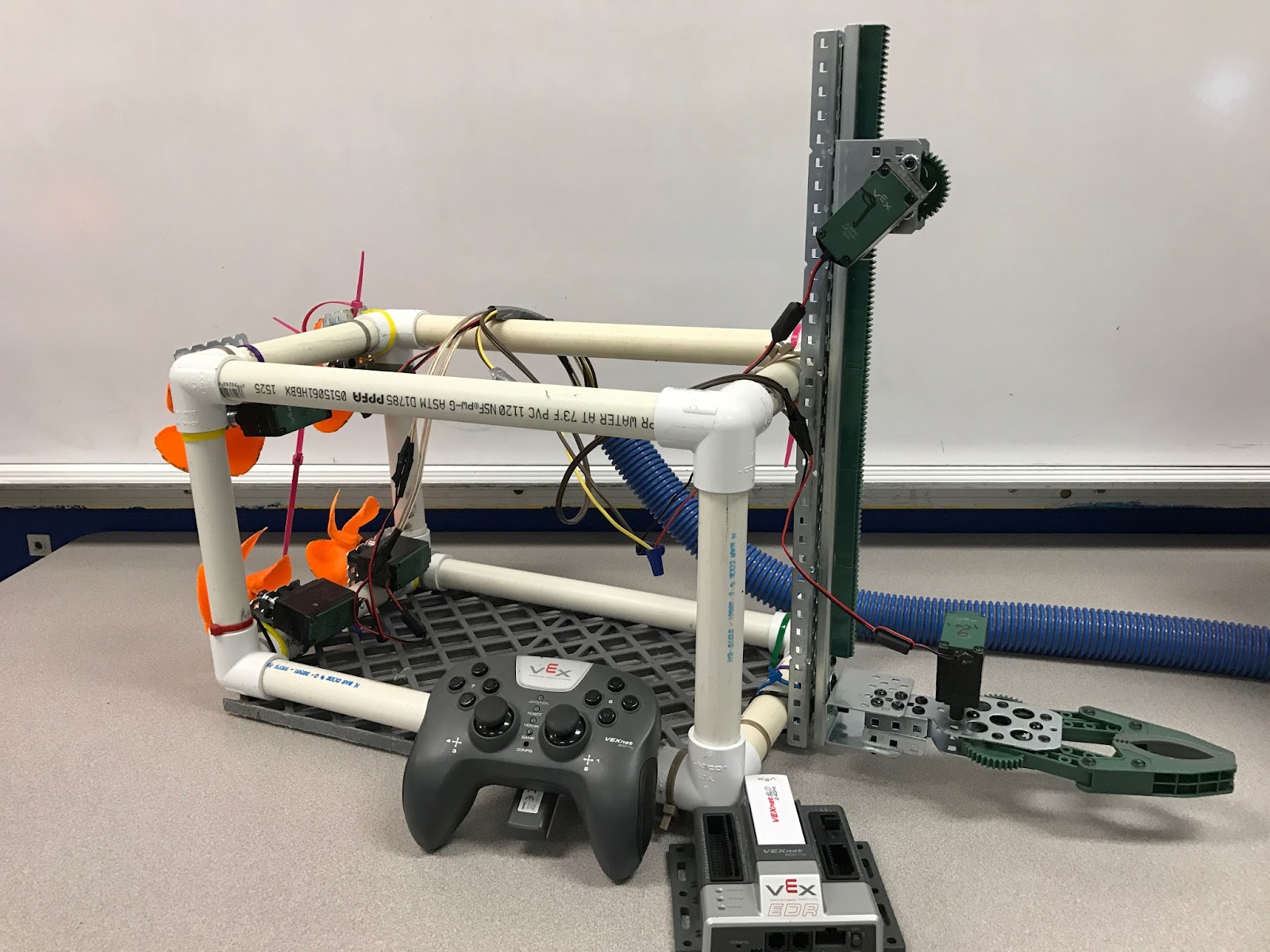 The West Washington RAD Air team was comprised of Team Captain Bryce Farmer, Tommy Tyler, Ivan Hunter, and Killian Traggesser. The Air challenge guidelines were pretty strict. The team had to simulate a water drop with an unmanned aerial multirotor vehicle. The design was to attach a payload to the drone and have that dropped over a target in a parking lot. There were 2 drop zones and 2 boxes that had items to be identified in them. There were 50 points total for the challenge. All of the other teams bought an out of the box store bought drone for the challenge then attached the payload apparatus to it. We built from scratch our own drone from parts and components that we researched. Despite some last minute complications with an electronic speed controller failure the Air team finished in 1st place for the second year in a row. We had to buy a drone 1 day before the competition and attach our payload apparatus to it. Without adequate flight time with the new drone we were skeptical going into competition day.  Our team captain Bryce Farmer worked quickly and efficiently with his team and successfully created a whole new design and got it attached properly. Our team Pilot Tommy Tyler was the only pilot from any  team that did the competition completely from the first person viewing screen. In the afternoon flight the team had a perfect run scoring 50 points. We were also the only air team that left with a flying drone. All other teams had crashed them in the extremely windy conditions. 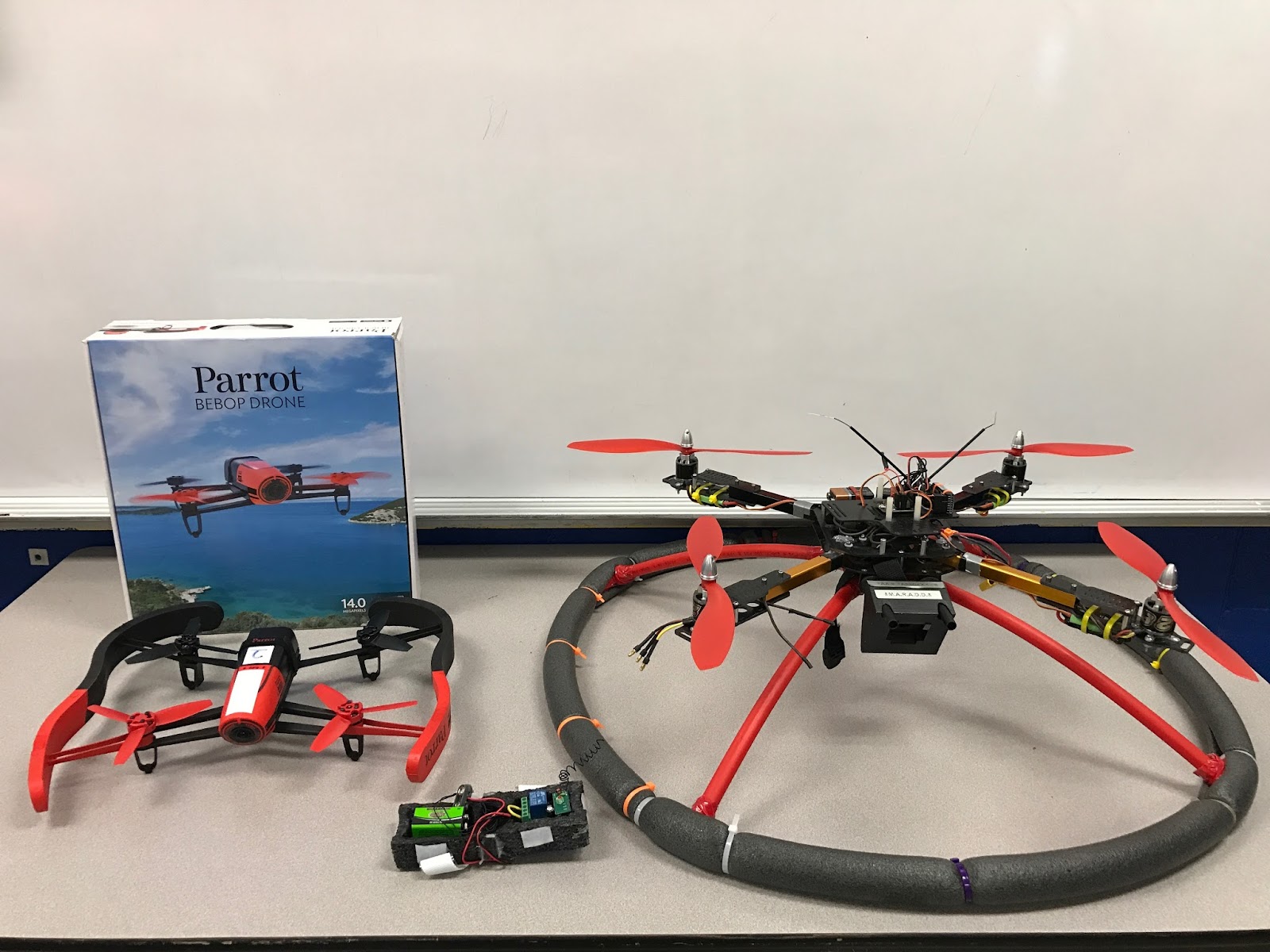 We competed with the Parrot Bebop and the design to the right is the homemade drone.

The land competition scenario was to build an unmanned land rover that could pickup and deliver supplies in an environment that was unsafe. The controls of the robot was to be done behind a screen and the team had to navigate with the use of a camera only. The team was comprised of Team captain Dylan Marrs, Ally Brown, Ben Roop, Isaac Lang, and Isiah Jenkins. In the biggest field of competitors the land team finished 3rd overall. The team scored style and innovation points for their ability to scan the field with a movable camera mount on the robot. 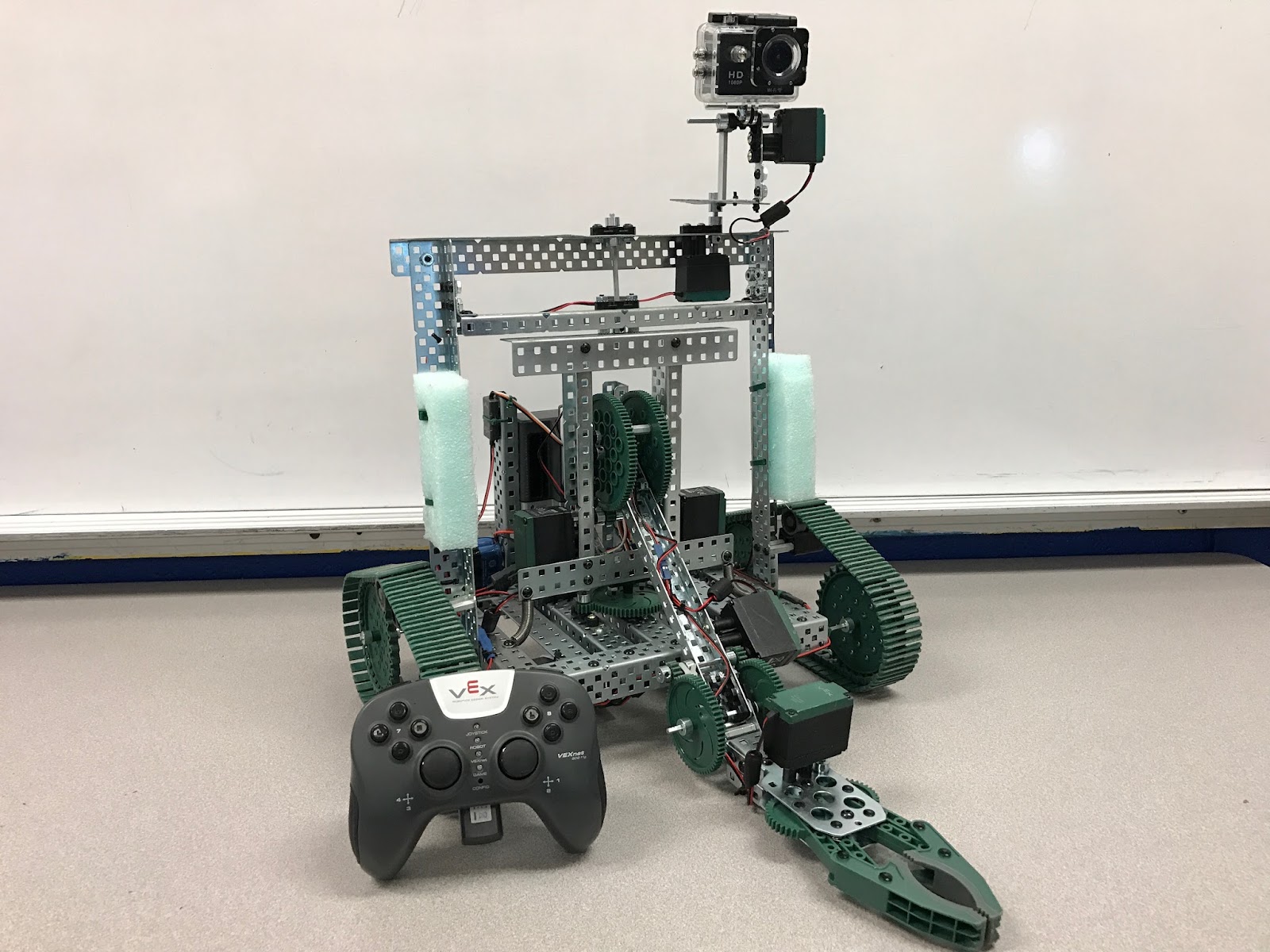 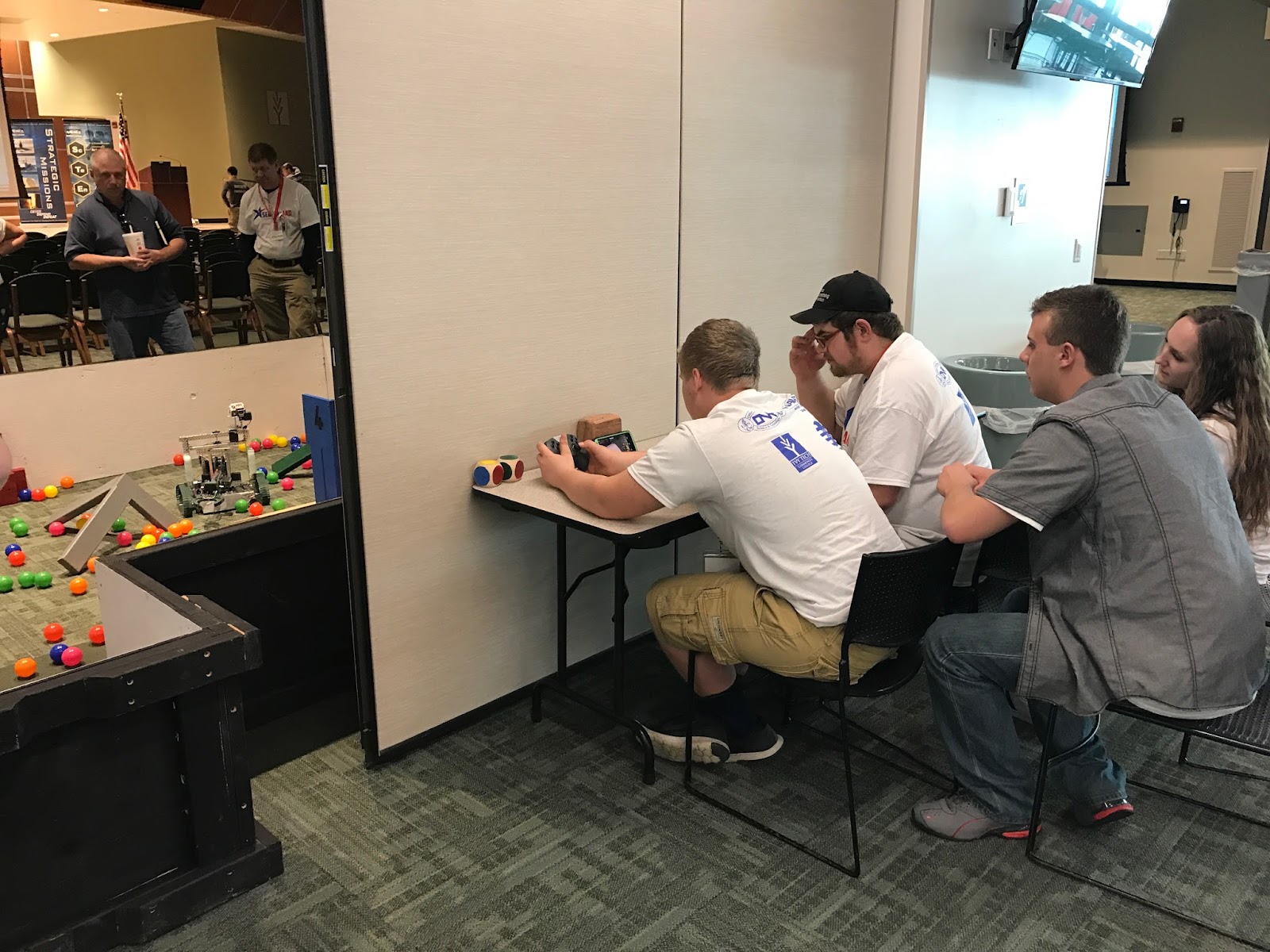 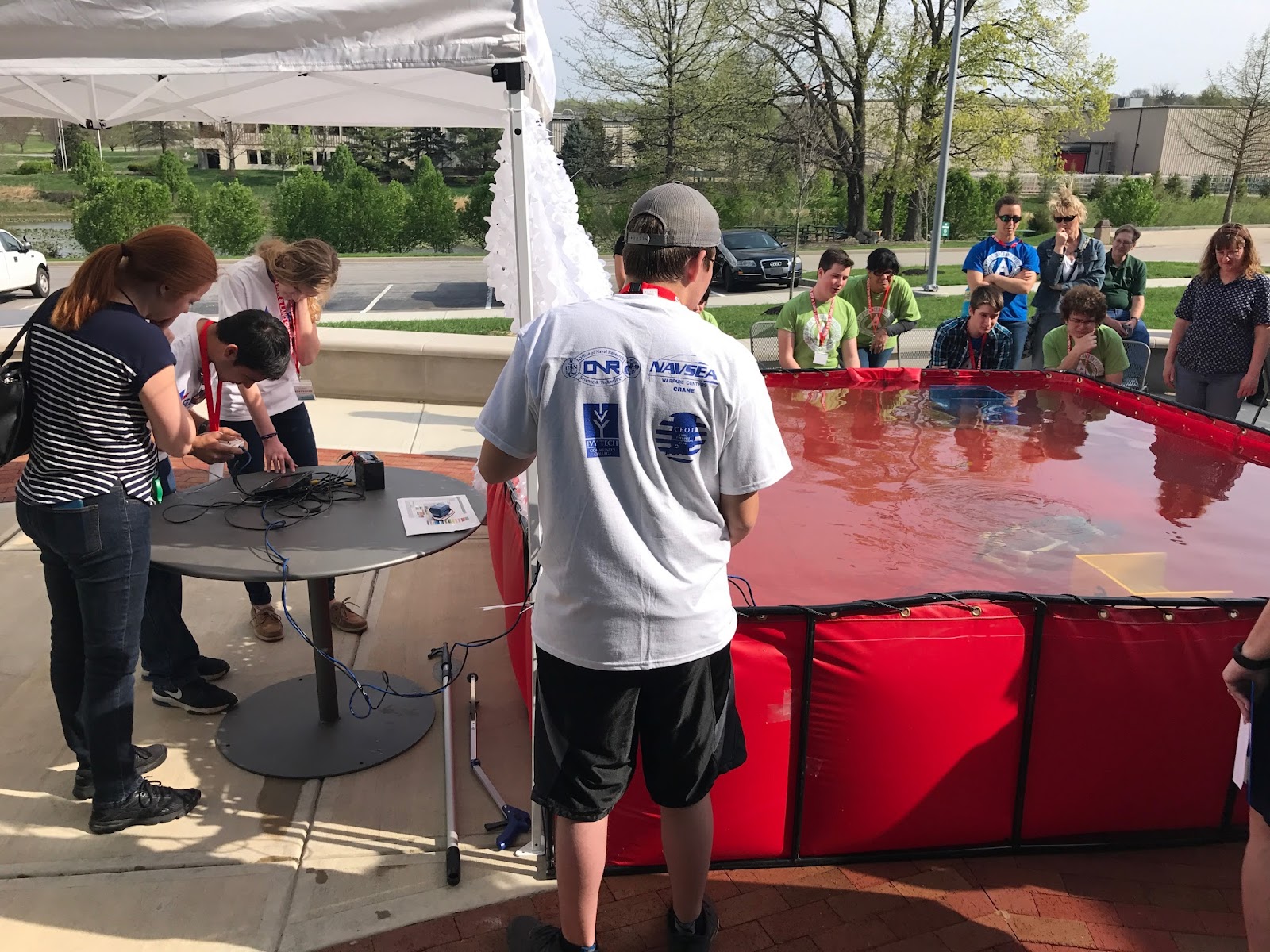 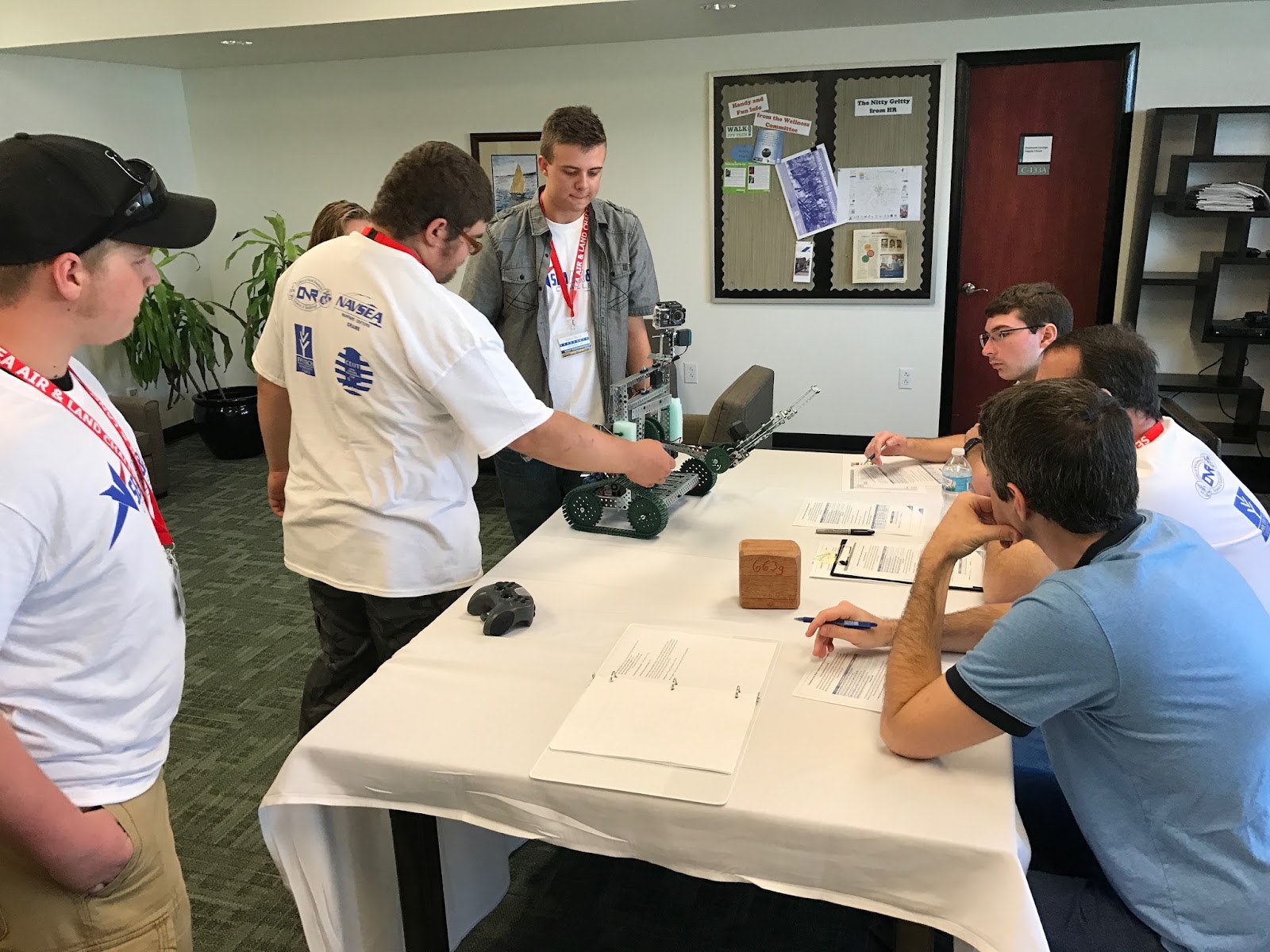 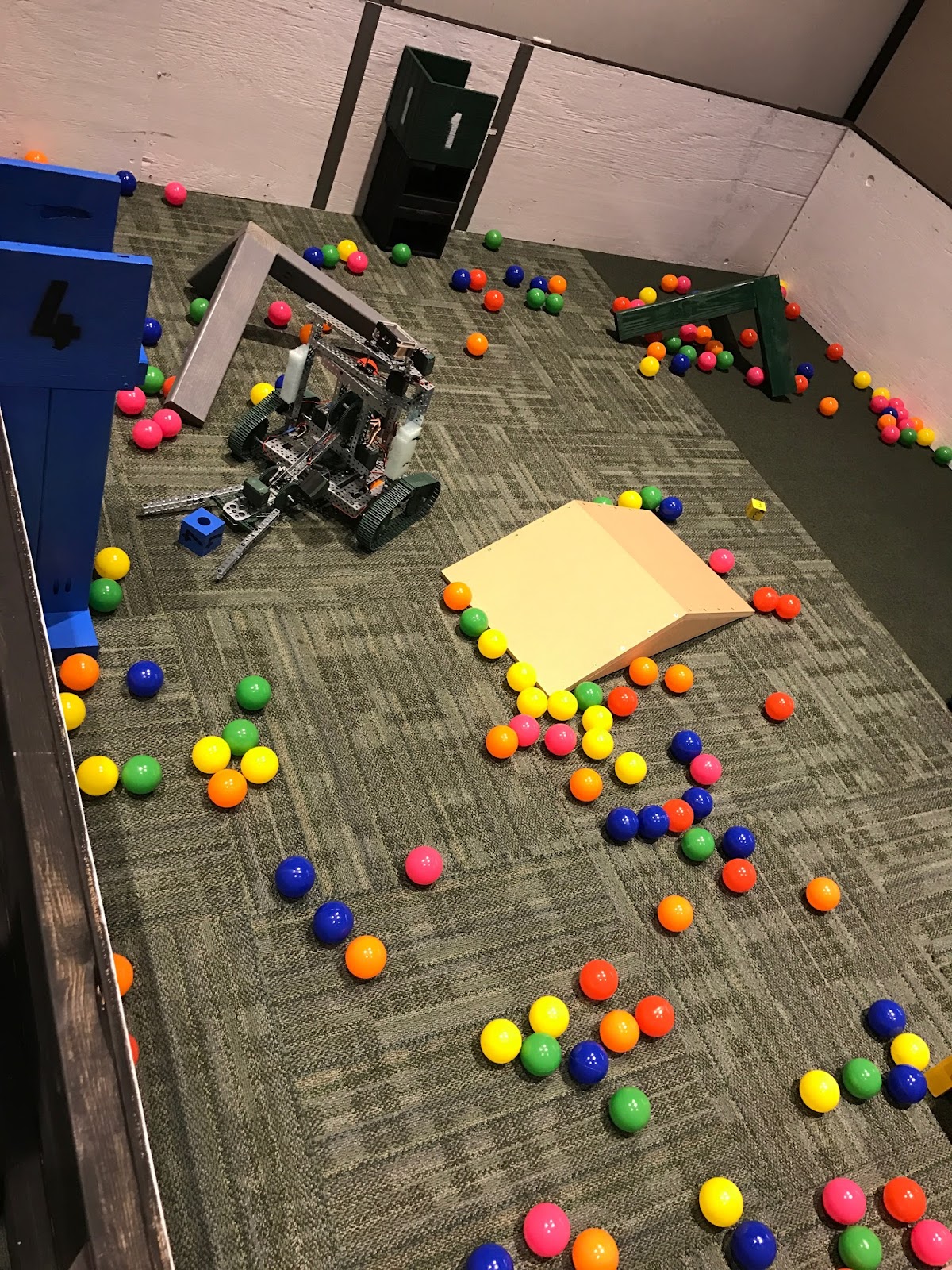 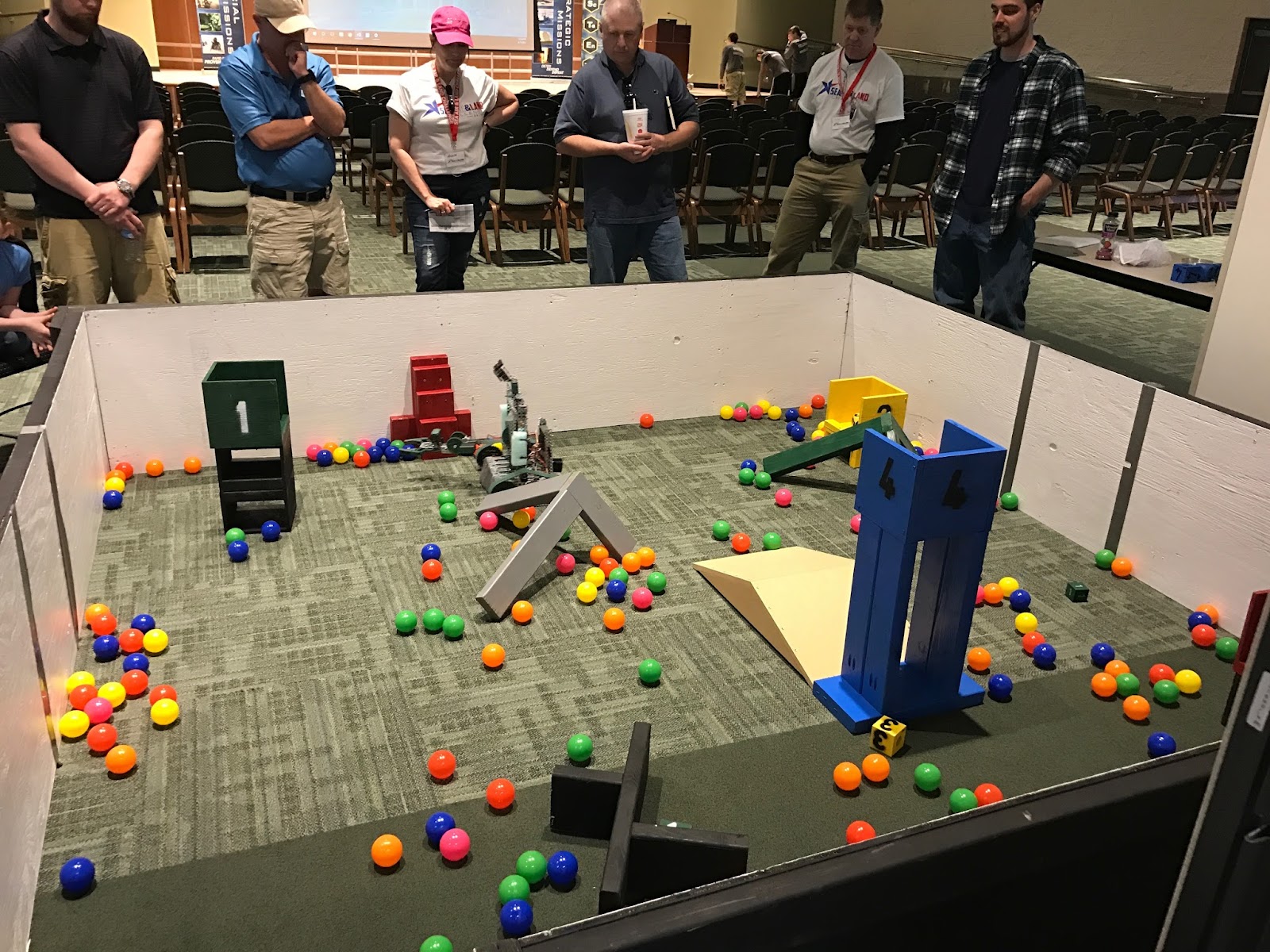 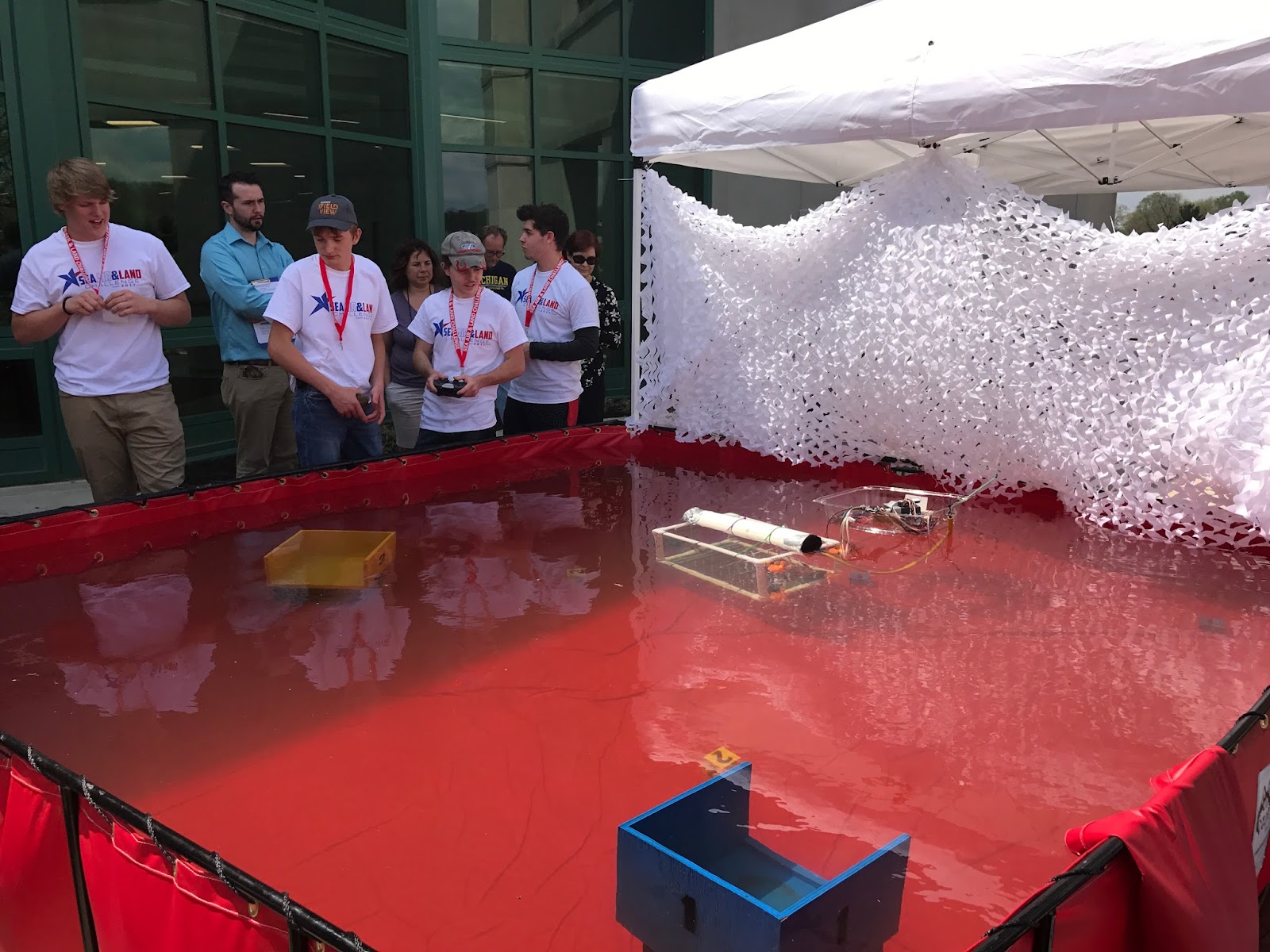 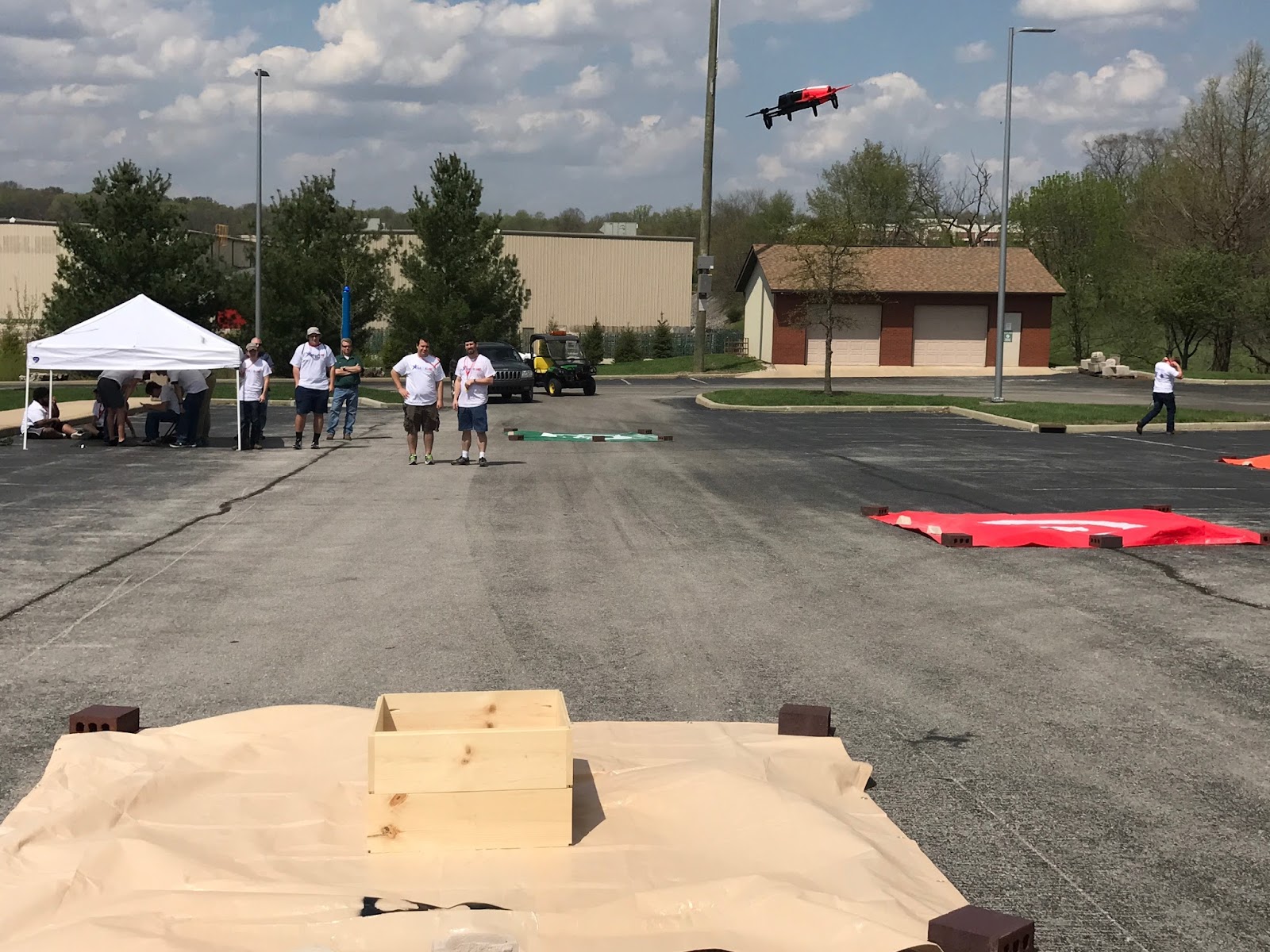 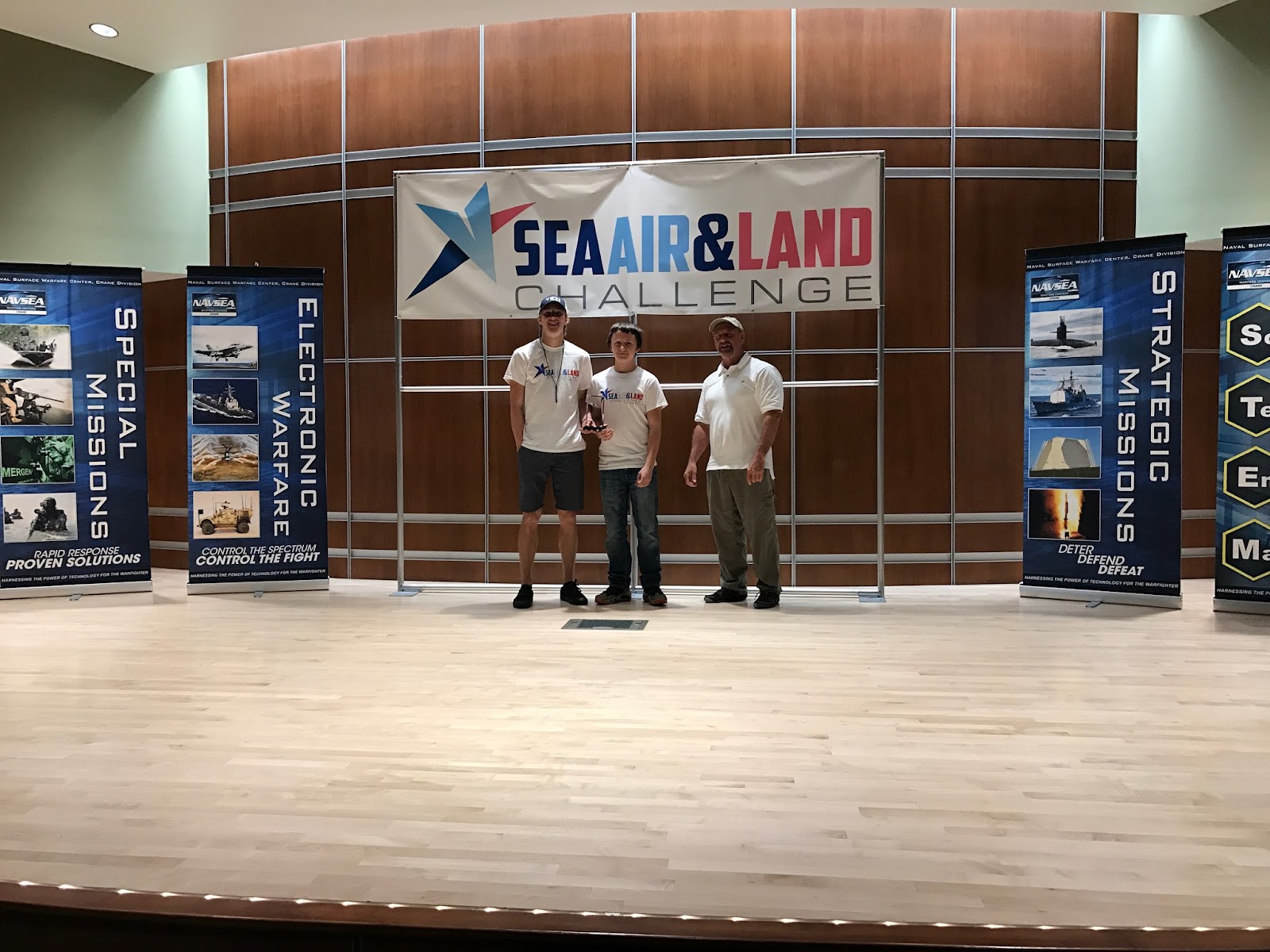 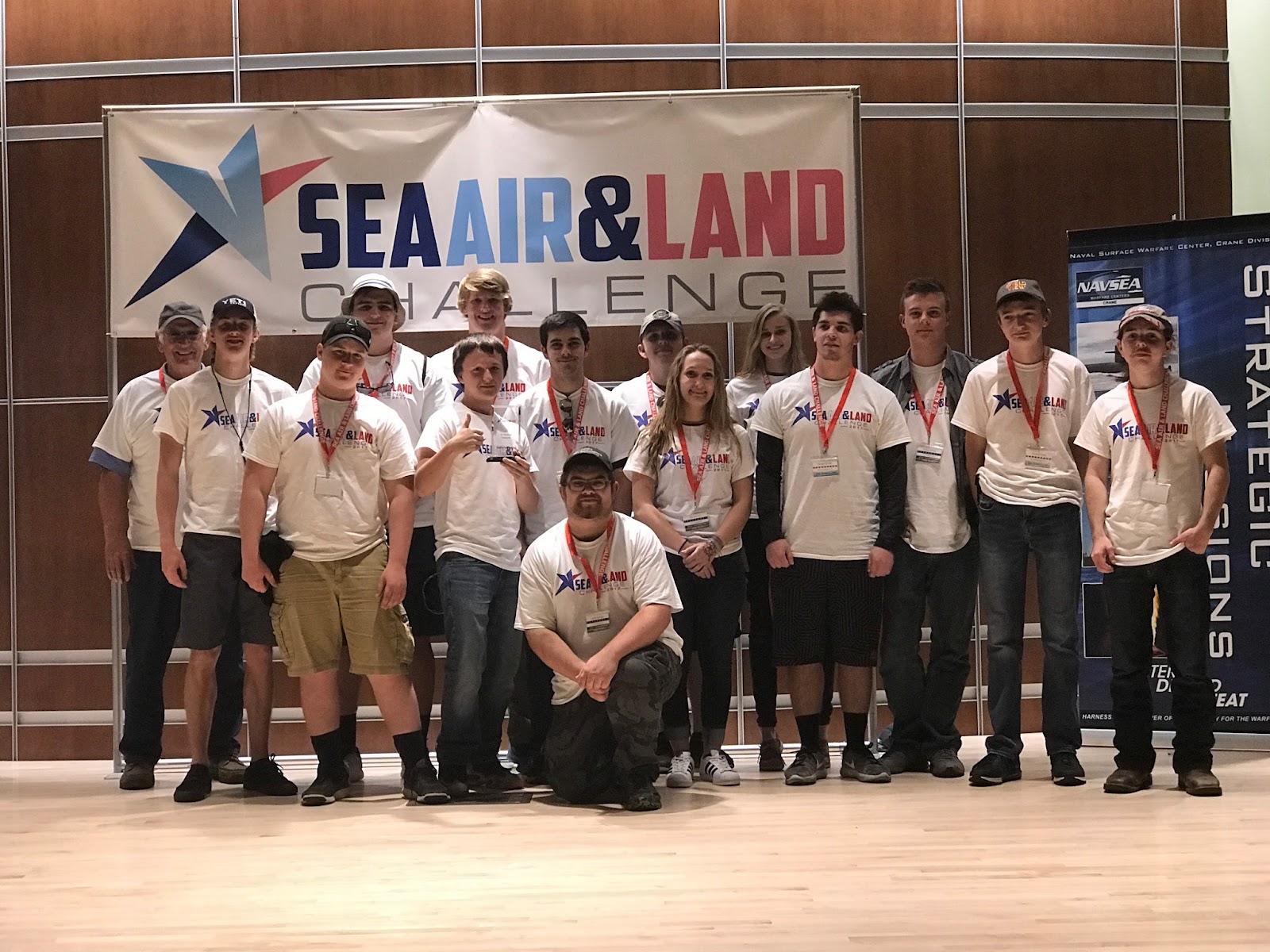 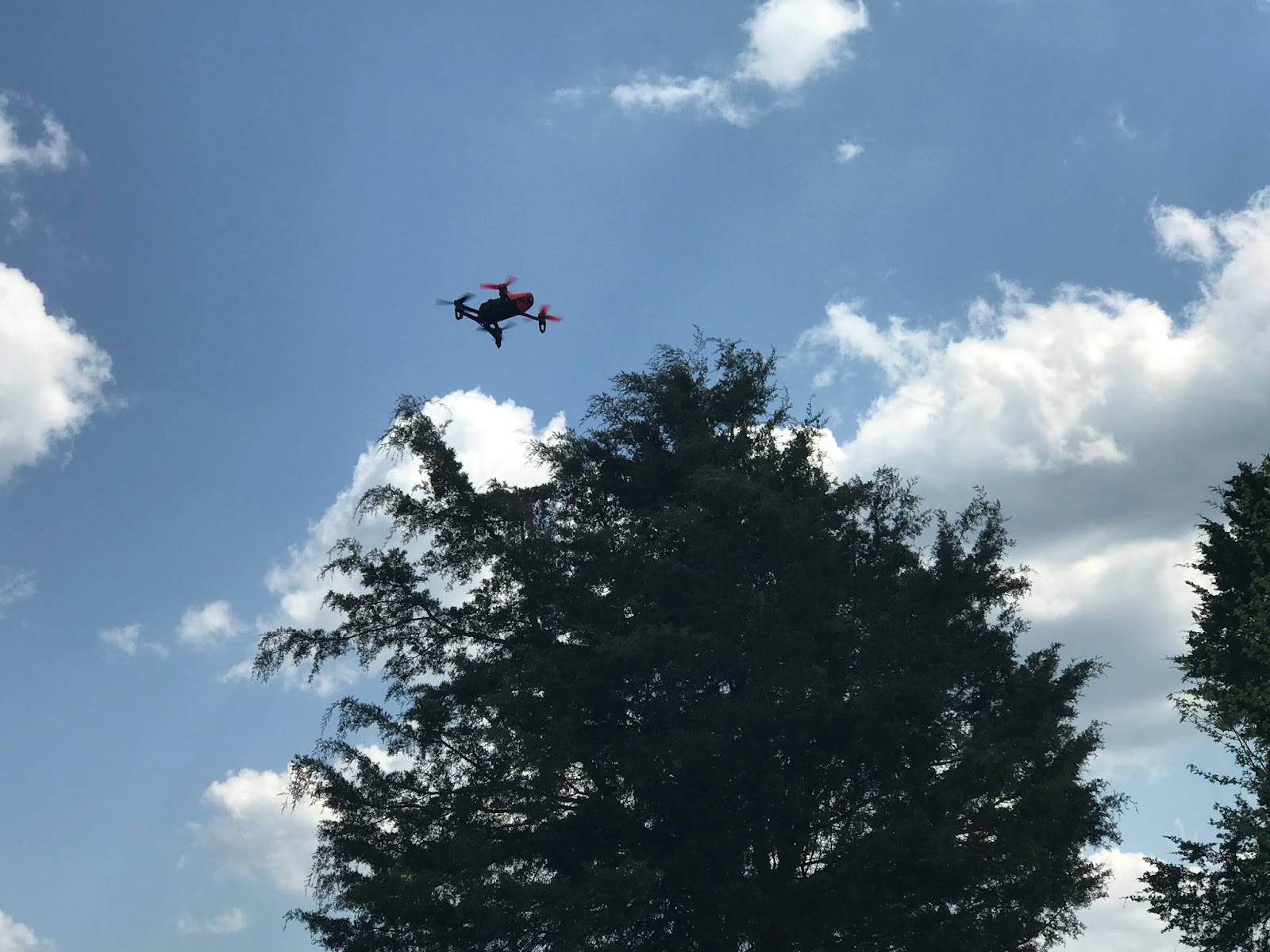 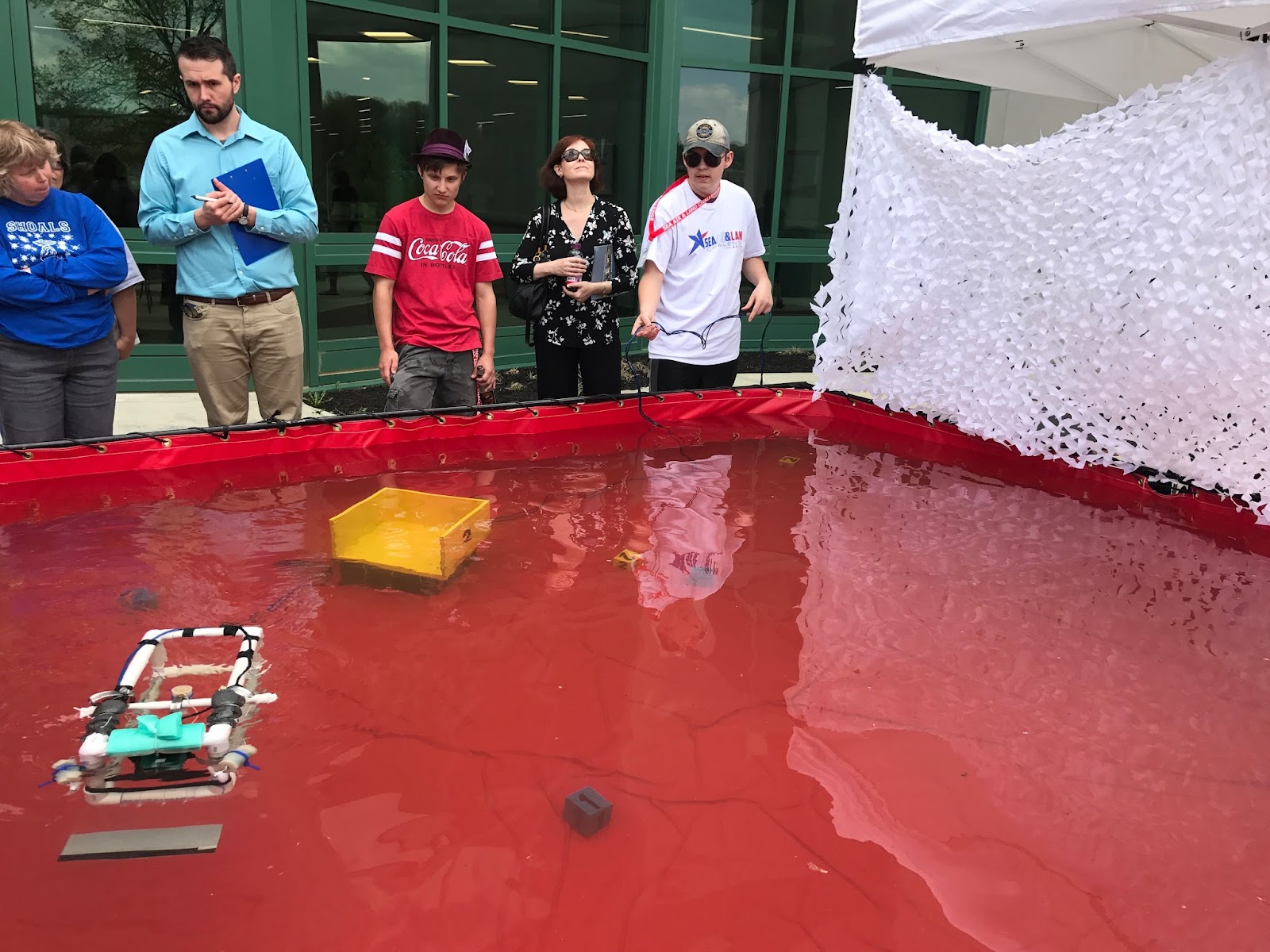