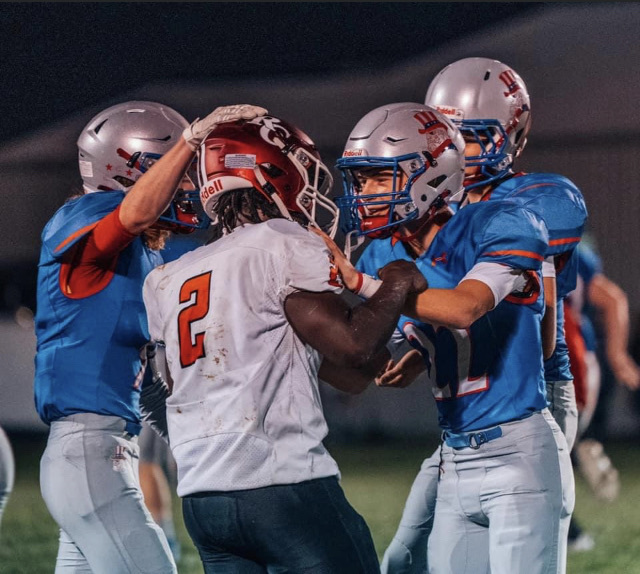 The world is round.  Those who have traversed through open water know this well. From horizon to horizon, all the eye can see is blue thrashing against even more blue.  In older times, sailors would spend months at sea, every day greeted with the same view.  The monotony moves from annoying to depressing as the days wear on. At last, peering over the horizon, land is sighted!  The crew erupts in joyous chorus.

The West Washington Senators, after a bout of quarantine and a couple losses, found land this evening, beating the visiting Rock Creek Lions, 44-0.

“Absolutely loved the energy and excitement our kids played with,” said head coach Jeremy Lowery.  “It was really nice to see them having fun playing the game we all love.”

The Senators would win the toss and elect to receive the ball.  Little time was wasted as the Senator offensive line tore through the Lions’ front, before sophomore slot back Greyson McCoy weaved through the defensive for a 25 yard touchdown run.

After the Lions’ turned the ball over on downs, The Senators would embark a more sustained, multiplay drive that would culminate with junior tailback Ethan Roberts powering it in from 3 yard out.

The Senators would get great field position after a botched snap on a Lions’ punt.  Sophomore quarterback Titan Williams would find senior wide receiver Hunter Thompson sneaking behind the Lions’ secondary on the first play of the drive for a 20 yard scoring strike.

The Senator defense would force another turnover on downs, and junior tailback Lee McPheeters would punch in a 3 yard run to make it 30-0.

The Senators would not be done in the first half, however, as freshman punt returner Hudson Cress would field a Rock Creek punt at midfield and following a big block by junior linebacker Bradley Hampton would dart through the coverage for a 50-yard touchdown.

With a running clock in the 2nd half, the Senators would add one more touchdown on a 10 yard run by Roberts.

The Senators travel to Perry Central next Friday.