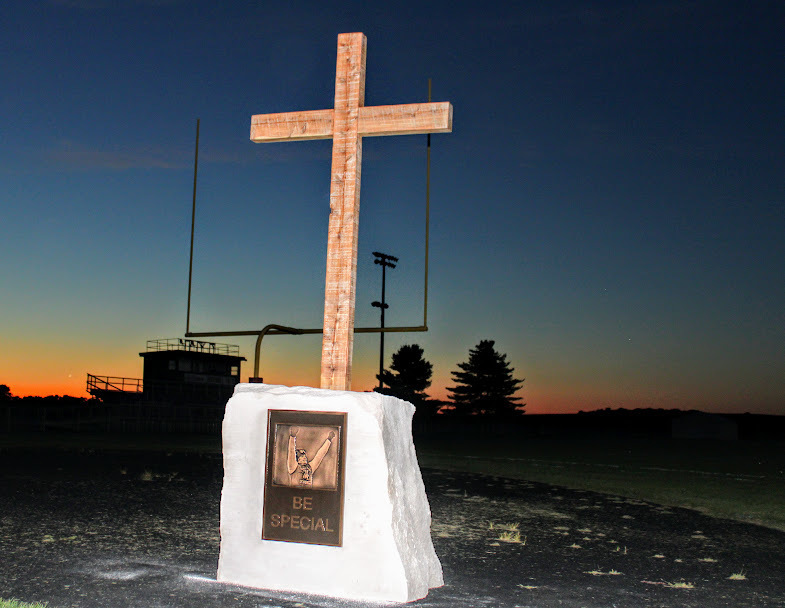 It was a Friday night without precedent at Art Sanders Field.

Gone was the smoky smell from white hot charcoal.  Even more lamentable was the absence of ribeye sandwiches crackling on the grill.  A food truck filled in admirably instead, all in the name of safety.

Masked fans, far fewer in number but strong than ever in spirit, smiled with their eyes at one another.  Multiple generations of Senator alumni, family and friends gathered on the outside of the fence along the north endzone, and still more around their computers to catch a glimpse of Friday night football.

It was not the way things had been, but at least there was football.

Of greater import, for the first time in 13 years, Phillip Bowsman was not on the sidelines to lead the Senators.  A large block of Indiana limestone and a cedar cross now sits in the south endzone in his memory.  A plaque engraved with Coach Bowsman, hands held high in victory greets every Senator player as they step on the field.  The inscription, like the man, is a rare combination of understatement and great power.

For a community dealing with the pressures and uncertainty of a pandemic and still reeling from the lost of one of their own, something special was exactly what was needed.

The West Washington Senators did not disappoint.

The Senators rolled up over 300 yards of offense and pitched a shut out en route to a 49-0 win over the visiting Eastern Musketeers.

“We had some miscues tonight, especially given the high level of emotion and limited practice time,”  first year Head Coach Keith Nance said.  “But overall our kids played hard, and we couldn’t be prouder of them.”

After the Senators forced a quick three and out to start the game, the Senators got on the board when a 6 play drive was capped with a 27 yard touchdown pass from senior quarterback Holden Bowsman to senior tight end Jacob Strange.  After forcing another punt, the Senators scored again on a 15-yard Bowsman scamper to take a 14-0 lead at the end of one quarter.

In the second quarter the Senators exploded, getting touchdown runs of 77 and 2 yards from sophomore running back Roper McPheeters, 2 yard run from senior running back Bobby Stevens, and a 10 yard pass from Bowsman to senior wide receiver Parker Green, giving the Senators a 42-0 halftime lead.

“It’s good to be playing,” said Green.  “Given the current circumstances, you don’t know if you are going to be playing week to week.  Coach (Nance) told us tonight that some teams got told at 4:30 they weren’t playing, so we are happy to be back on the field together.”

“It was an emotional night, but we came together and played for coach, and that’s what matters.”

The Senators added one more score in the 4th quarter, a 50 yard punt return by freshman Kenton Chase.

The Senators (1-0) will take on Crawford County (0-0) on Friday night at Crawford County.  Kick off will be at 7 pm.  The game will be available on WWSR and streaming online through the IHSAA website.